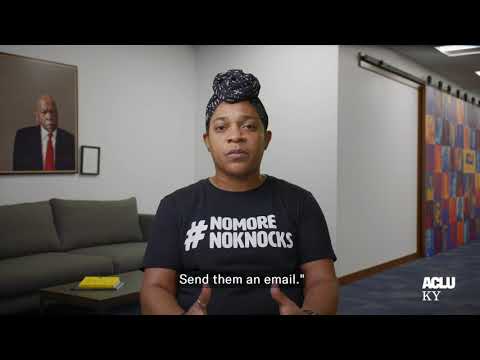 This was the refrain of the summer of 2020, which will forever be marked as the summer of protest, the summer of demands for justice. It was the summer the eyes of the world fell upon Kentucky, the home of an innocent Black woman who was murdered for no reason.

Saturday, March 13, 2021, marks the one-year anniversary of Breonna Taylor’s death. It wasn’t only the tragedy of a young and promising life stolen that moved Kentuckians to action from Hazard to Paducah; it was also the insult of injustice.

Fueled by collective grief, Black Kentuckians led the call for justice, and thousands of Kentuckians from all backgrounds and corners of the commonwealth followed their lead. They allied to demand police accountability and to declare once and for all that Black Lives Matter.

The ACLU of Kentucky immediately expanded its racial justice work to ensure a death like Breonna’s never happens again. ACLU of Kentucky Policy Strategist Keturah Herron knew our organization’s role was to take the people’s demands and turn them into policy. Her goal was to first ban no-knock warrants in Louisville, and then take the measure statewide when the General Assembly convened 7 months later. Working with allies, Keturah crafted Breonna’s Law and launched the #NoMoreNoKnocks campaign. Just 17 days later, the measure unanimously passed Louisville Metro Council and was formally named “Breonna’s Law.”

Internally, we renewed our commitment to racial justice by reexamining our work in all areas to approach policy through the lens of racial justice. When we lift up the people most harmed by society, we lift up all people. We also began the ongoing and difficult process of self-reflection to root out white supremacy in our own organization and hold ourselves to the same standards we expect from others.

Our work has carried into the General Assembly for the 2021 legislative session. Keturah has successfully collaborated with lawmakers from around the commonwealth and from both parties to create legislation that will save lives.

Breonna was an EMT and wanted to save lives. We will continue this work to honor her legacy and fight for a commonwealth that treats all Kentuckians equally under the law.

ACLU-KY Statements Regarding Passage of Breonna's Law by Louisville...