Listen to the audio of the press conference in the box below. Skip to press release to see list of organizations and speakers. 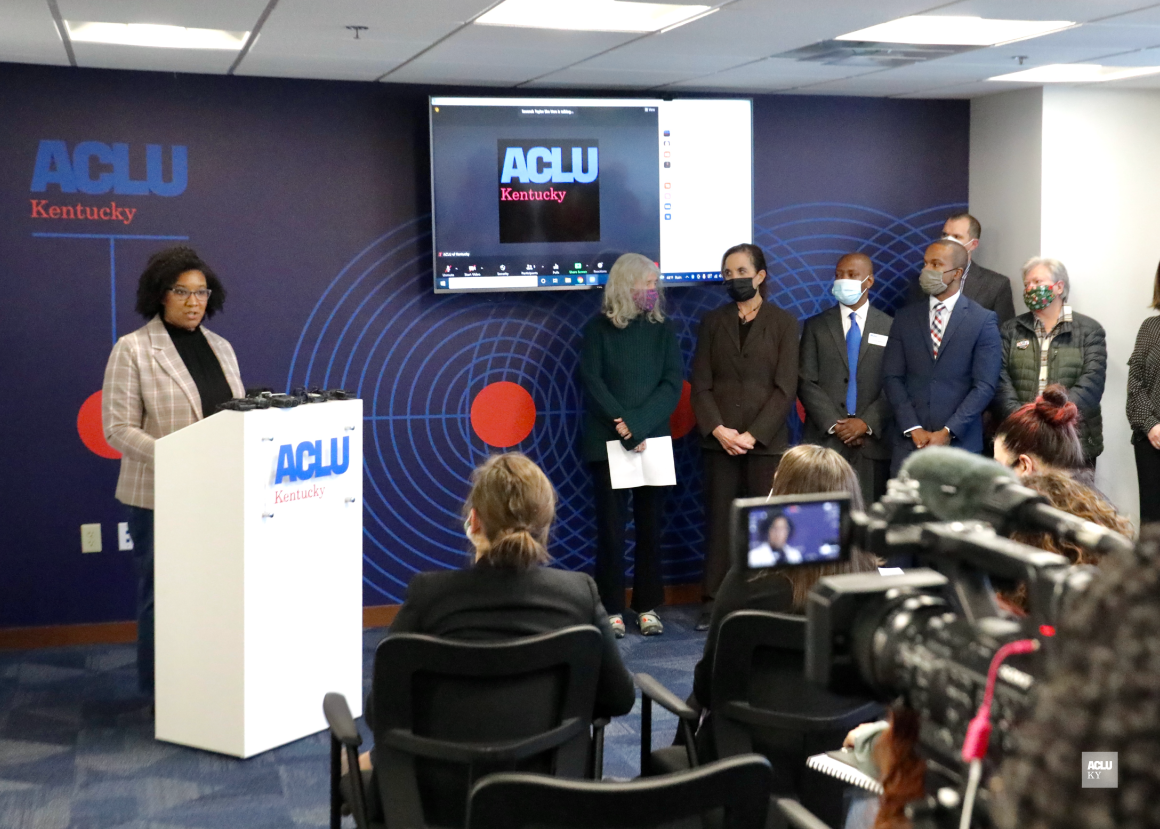 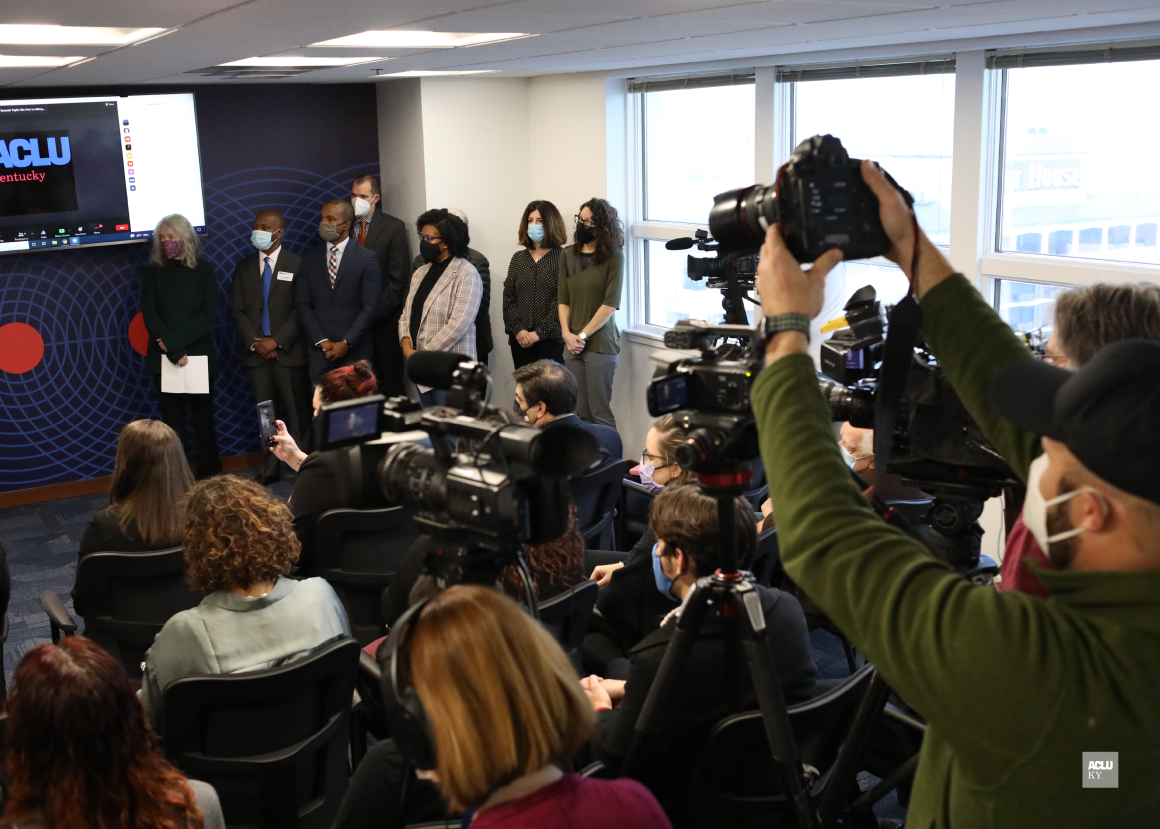 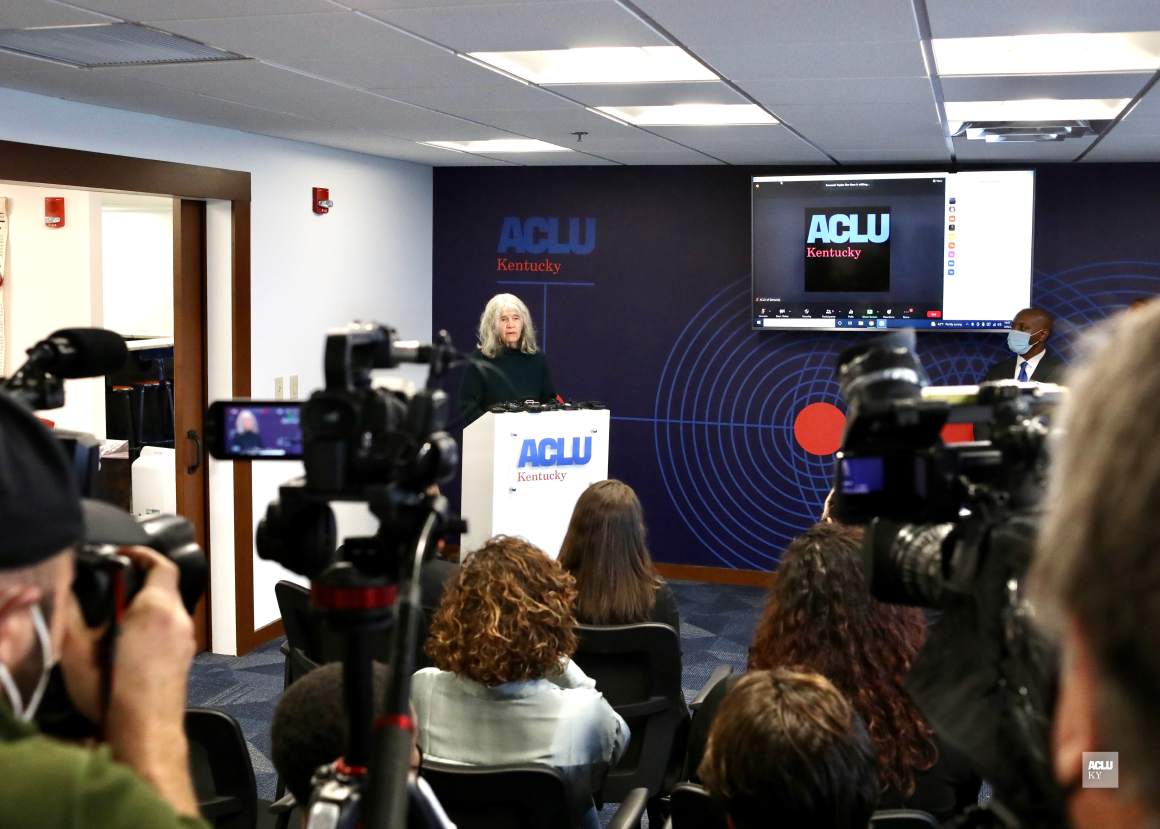 Three people have died in the custody of Louisville Metro Department of Corrections (LMDC) in just the past week, shining a violent light on the abhorrent conditions in the city’s jail. The conditions are dire and untenable for both incarcerated people and corrections officers. These conditions are exacerbated by a broken cash bail system and the failed war on drugs, which are both fueling overcrowding. A number of people held in LMDC are incarcerated simply because they cannot afford to post bail.

In September 2021, 15 people experienced drug overdose in LMDC’s care. In October, the ACLU of Kentucky, along with several other community groups, highlighted the deadly conditions and called on the Mayor and Metro Council to act. Leadership refused, and more people have died.

When the government chooses to incarcerate a person, it also takes on the responsibility of caring for them. Incarceration is not a death sentence. Mayor Fischer, Louisville Metro Council, and various actors in the criminal legal system must take emergency action to correct the deplorable and inhumane conditions in the Louisville Metro Department of Corrections.

Following the conference, the ACLU of Kentucky's immediate next step was to meet with community partners and organizations. Together, we drafted a letter outlining specific and realistic demands for emergency actions elected prosecutors and judges can take independent of Mayor Fischer and Metro Council.

The letter was addressed to Jefferson County Attorney Mike O’Connell, Commonwealth Attorney Tom Wine, Jefferson Circuit Court Chief Judge Angela Bisig, and Jefferson District Court Chief Judge Annette Karem. It was shared with Mayor Greg Fischer and LMDC Jail Director Dwayne Clark. As of 5PM ET, Monday, December 6, the letter was signed by 19 organizations on only a couple of hours notice. We expect more to join. (If your organization would like to sign on to the letter, please email ACLU-KY Communications Director Angela Cooper at Angela@ACLU-KY.org or call 502-581-9746.)

We are seeking immediate relief for the people suffering in Louisville Metro Department of Corrections and demanding the Commonwealth Attorney Tom Wine and Jefferson County Attorney Mike O'Connell immediately stop requesting bench warrants with cash bonds for anything other than alleged offenses that present a legitimate threat to community safety. We are also demanding LMDC enforce its current contract with Wellpath Medical services to support people with substance use disorder – because, as we all know, affordable and accessible treatment is part of the solution to our commonwealth’s substance use disorder crisis, not incarceration.

When the government chooses to incarcerate a person, it takes on the responsibility of caring for them. According to information from the Fraternal Order of Police, 74% of people incarcerated by LMDC are incarcerated simply because they cannot afford to post bail. The broken cash bail system and the failed war on drugs are fueling deadly overcrowding, endangering both incarcerated people and corrections employees.

Of the three deaths this week, two were Black women, one of whom allegedly died from a drug overdose and the other allegedly from suicide. Information about the third death has not been shared, and no official or conclusive reports have been issued regarding any of the three.

ACLU-KY Finds Common Ground with FOP, Calls for Alternatives to...

Treat Simple Drug Possession as a Misdemeanor, Not a Felony