The following letter was written by Community Stakeholders to End Deaths at LMDC, a coalition of organizations working to save lives in Louisville Metro Department of Corrections.

When Stephanie Dunbar’s life was cut short within the walls of Louisville Metro Department of Corrections, seven people lost their mother, and a community lost a friend who enjoyed feeding the hungry. Stephanie’s family and community are not alone. So too, is the stark reality for the families and friends of Kenneth Hall, Rickitta Smith, Gary Weatherill, Keith Smith and Lesley Starnes.

If Louisville is to be the compassionate city we claim to be, immediate action must be taken to ensure no further loss of life and improved standards of care for those housed at LMDC.

One life lost is too many — six is incomprehensible — as are the conditions hundreds face daily inside LMDC. As winter temperatures plunged, hundreds of people slept on mats on the cold floor, sharing rooms designed to hold half or one-third of the people inhabiting it.

Overcrowded conditions become even more inhumane each time someone uses the toilet. As if being caged and forced to publicly use the bathroom isn’t dehumanizing enough, there is also the deplorable fact that the toilet water system is the same system used for the communal sink and drinking water. 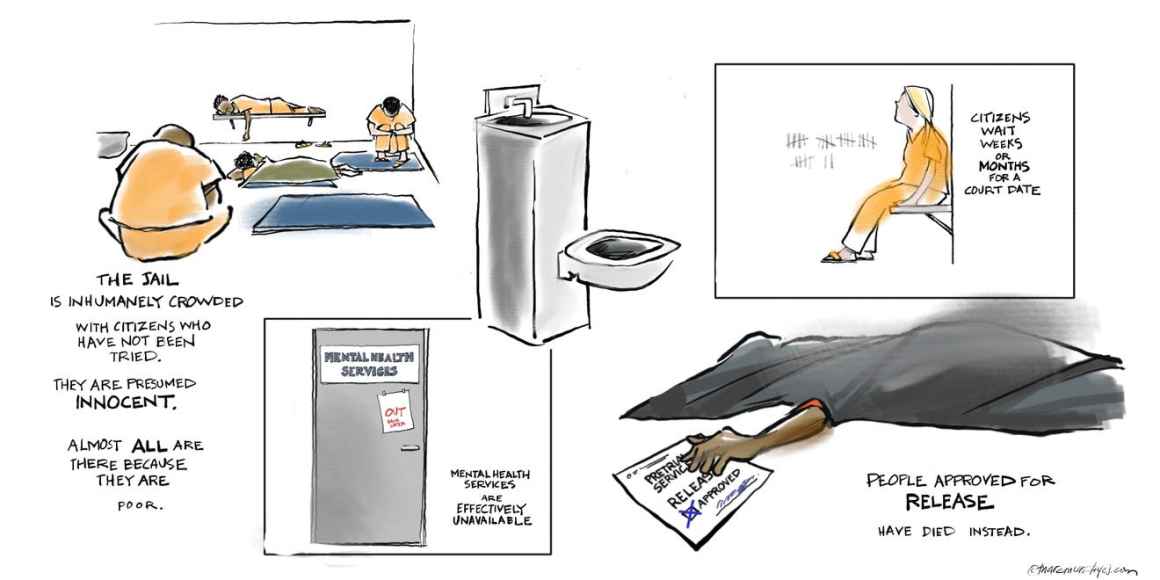 This is not okay. Yet in corrections facilities around the country, deplorable, inhumane standards have become the standard. In a society that unfortunately glorifies the concept of law and order, little sympathy is reserved for those deemed criminals. Shockingly, in our “innocent until proven guilty” legal system, nearly 80% of people held at LMDC are done so pre-trial or before a finding of guilt. Many are behind bars simply because they cannot afford bail. Which begs the question — if they had a few more dollars would they be more worthy of our sympathy and care?

Our current system punishes those who cannot afford to buy their freedom — before being found guilty of a crime — disappearing them into cages where they are treated as less than human in overcrowded, unsanitary conditions without access to proper mental or physical health care.

Mental health care is a large component of what our current system lacks. For some of the lives lost in LMDC, improved mental health screening could have made a difference. The National Alliance on Mental Illness states that one-third to half of the people in prisons and jails have a form of mental illness. Proper screening and treatment are vital to the well-being of any population, and unfortunately with an estimated 70% of jails using privatized medical services, essential mental health services have fallen by the wayside.

This is unconscionable, but it does not have to be this way. There are immediate action steps city leaders can take to decrease the jail population and increase care for those who remain behind bars. We shouldn't merely talk about ways to do better, we must actively work on ways to be better.

Due to the criminalization of poverty, incarcerated populations are often economically disadvantaged, disproportionately Black or other people of color, and many need assistance or community resources not found in a jail cell.

Plenty of leaders are working tirelessly to improve LMDC conditions and end the loss of life, but it will take all city leaders acting quickly and holistically towards meaningful changes for those behind the walls of LMDC — many who should never be there in the first place.

Meaningful changes will result in marked improvement within LMDC. It is a good place to start. But, going forward, as a community, we must utilize our imaginations and compassion to reevaluate the prison industrial complex and its devastating effects on our most marginalized neighbors. We owe this to one another, but most of all, we owe it to Stephanie, Kenneth, Rickitta, Gary, Keith and Lesley.

The Kentucky Alliance Against Racist and Political Repression

The Sowers of Justice Network

After 3 Deaths in Louisville Jail in 1 Week, Judges and Prosecutors...

Why Amnesty for Bench Warrants Can Save Lives in Louisville Jails