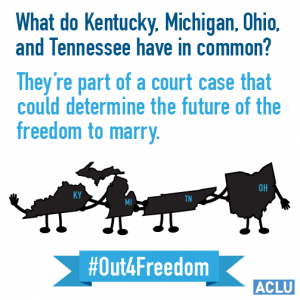 The ACLU of Kentucky and The Fairness Campaign are teaming with Equality Ohio, the Tennessee Equality Project, Equality Michigan, the ACLU of Kentucky, and dozens of other organizations to host a "Rally for Marriage Equality" on Tuesday, August 5 at 5:30 p.m. in Cincinnati's Lytle Park. The event features a keynote address by former Ohio Governor Ted Strickland and is intended to build momentum and support for LGBT marriage before oral arguments in the Sixth Circuit Court of Appeals Wednesday that will decide six marriage cases in Kentucky, Michigan, Ohio, and Tennessee.

Oral arguments will be held at 1 p.m. on Wednesday, August 6 at 1 p.m. at the 6th Circuit Court of Appeals in Cincinnati. Entry to the courtroom will be limited and available on a fist-come, first-served basis.